What does the trigger shot feel like, and how is the retrieval under anesthesia? Here’s Ovally founder Kathy’s personal account starting 36 hours before her egg retrieval until a few hours after the procedure. If you’re interested in the hormone stimulation period leading up to the egg retrieval, check out the previous blog post.

Half an hour ago, I did the last injection, the so-called “trigger shot”, which contained a third substance I hadn’t injected before. The trigger shot seemed like a lot to inject volume-wise, but luckily it didn’t hurt much. Unlike the anti-ovulation hormone I’ve been injecting, the trigger shot didn’t burn afterwards. As its name suggests, this shot triggers the eggs to fully mature in their enlarged follicles and has to be done exactly 36h prior to the egg retrieval. Over the next 36h, my eggs are supposed to undergo meiosis, which means they should divide to decrease the number of chromosomes in each egg from 46 to 23. Half of the chromosomes will apparently get expelled from the egg nucleus, as a sperm can only pair with an egg that has exactly 23 chromosomes.
I also had to inject the anti-ovulation substance I’ve been taking for a few days at an earlier time than usual today. The doctor noticed during ultrasound #5 this morning that some of the follicles could be close to ovulating and releasing an egg, which we don’t want to happen. I’m no longer injecting any follicle-stimulating hormones at this point and am now just waiting for the retrieval on Monday morning.

I’m excited to be done with injections but admittedly nervous about the retrieval. I’m still feeling ok, and not much has changed over the last few days – am still quite bloated, maybe more tired, and sometimes feel soreness or cramps in certain positions.

My husband took some antibiotics tonight to make sure his contribution to my eggs won’t contain any bacterial infections. We’ve been taking it slow and have been spending some time in Madrid’s many museums. 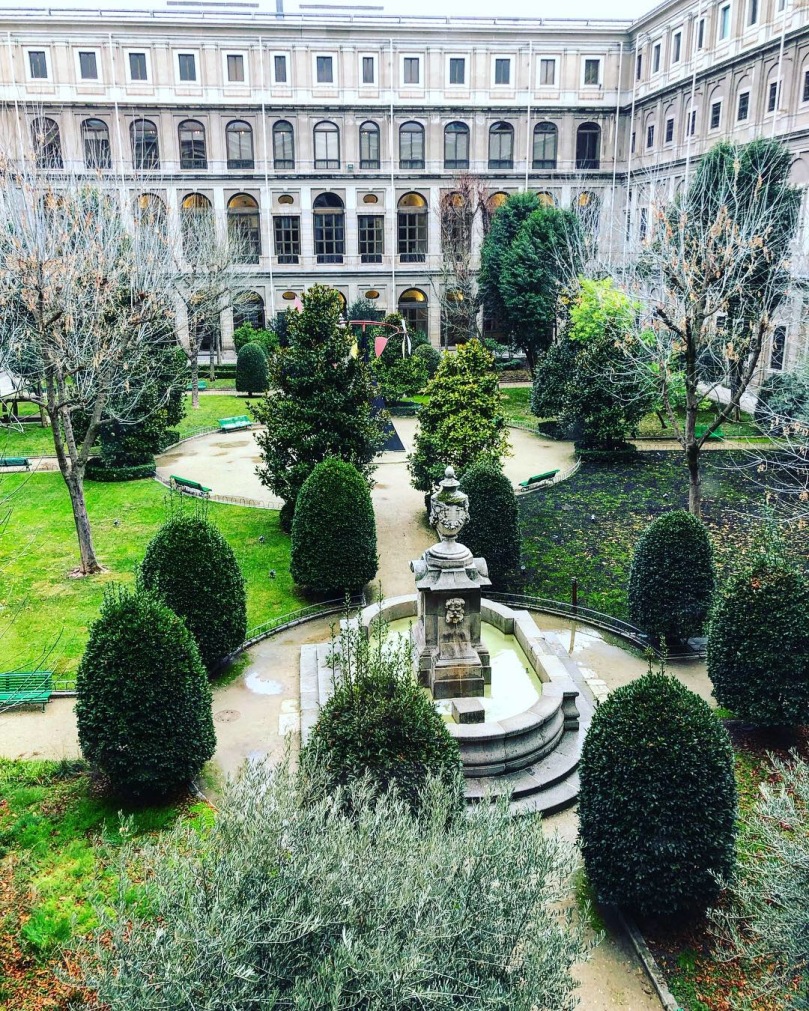 Day 11 – last day before the retrieval

It’s 11h to go until the surgery, and I’m nervous. There’s no rational reason for it, I just don’t like the idea of being under anesthesia, even if it’s just for 15min. Today I felt less bloated and sore – wonder if not taking any follicle-stimulating hormone helped. Except for a dose of antibiotics (to decrease any chance of infection for the surgery), I didn’t take any meds today. Hopefully my eggs have been working away at maturing. I’m impatient to know how many eggs will end up being mature after retrieval. It’s hard to tell from the ultrasound if the eggs inside the enlarged follicles are truly mature. Sometimes follicles can be enlarged but have no egg inside, and sometimes eggs don’t fully mature (i.e., meiosis doesn’t happen, or is incomplete).

Since I was feeling unexpectedly good today, we took the train to Cordoba, a beautiful city in Andalusia that has some of the best preserved Moorish architecture (going back to the 8th century!), as well as some Roman ruins and beautiful courtyards.

We did it! And it’s all out of our hands now. This morning we got up early, sleepily took the subway to the clinic, and I changed into a surgical gown and a pair of booties. Then we waited for the team of doctors to assemble and take me to surgery. I can’t say it was comfortable to be strapped into a chair with my legs up (like during an OBGYN exam), with a medical team around me. However, after the IV was in, the anesthetic kicked in really quickly. Next thing I knew, I was under a cozy blanket in a different room, and my husband came in.
My memory of the first 5 minutes after the procedure is pretty fuzzy, and I definitely repeated some questions later on, but I felt no pain, and everything had gone well. As expected, the procedure had taken about 15min. Using ultrasound, the doctor had located all the enlarged follicles and sucked the egg out of each one. While I was in the operating room, my husband was in a different room, presumably having a more pleasant (if awkward) time producing his contribution to the embryos.
Once I was dressed again, the doctor checked in – it turns out they were able to retrieve 30 eggs! Another 13 follicles must have grown since that first ultrasound when we counted 17. We’ll see how many of the eggs will turn out to be mature enough and fertilizable. I had some very light bleeding right after the surgery, and the doctor told me they’d given me a small dose of pain medication. I also felt an unexpected post-anesthesia high, which was a nice touch (turns out this is a thing!). It took about an hour for the brain fog and mild nausea to fully subside; we were already headed back to the hotel during that time.

It’s 15h later now, and I haven’t taken more pain meds (yet?). I feel a little bit of discomfort around my ovaries that involves some subtle cramping but have been more active today than I expected to be. I’m also still bloated but not more so than yesterday. We took a midday nap but otherwise have taken 15k steps today. It’s a relief to be done and be able to give my body a break now. I have so much respect for any woman who’s gone through this as part of IVF, which I imagine comes with a whole different set of emotions and stressors, and who’s undergone this procedure multiple times, not to mention all the challenges of a subsequent pregnancy.

If you’re only freezing eggs, the retrieval marks the end of your treatment. Once your eggs are collected, they are checked for maturity (i.e., the correct number of chromosomes) and subsequently flash-frozen. If you’re freezing embryos or undergoing IVF, the journey continues from here – read our next post for more.

This site uses Akismet to reduce spam. Learn how your comment data is processed.

Welcome to The Ovally Blog! Ovally is a fertility startup with the mission of making fertility treatments more accessible and providing the best possible support to patients. This blog features scientific research in response to questions we hear a lot from customers, as well as personal stories. If you’re looking for medical advice, please consult your doctor.